Today we pushed out a new version with some nice improvements all around. You can now star and label email attachments, making them integrate more naturally into the whole program. Thumbsnail are a bit bigger and have correct aspect ratio, the German translation has gotten a huge update and lastly we made minor tweaks and done some performance improvements. Enjoy! 🙂

We just released the fifth maintenance release for the 1.2 release which added email integration. Besides the normal bug fixes, there is one change I would like to explain in more detail in this post.

A few versions ago, we changed how modification time behaves (in some cases), and with that how files are displayed. What we did was that we said; if the creation date of the file is newer than the modification time, then it must be “better” to use. Because that point in time is more likely to be when you remember something about it. Sadly this change, while good intended, has some bad effects.

This worked well when you plugged in an external drive that you got from another person and transferred some files to your computer. In that case you are more likely to want to know when you copied the file, rather then when he changed the file.

But in almost all other cases, it is better to just use the modification time. Modification time is what Windows shows most prominently and hence, most programs have adopted to make this relevant. One example is Dropbox. Imagine you change a file on one computer. And next day you turn your other computer. Then you want to show the file as yesterday, and not when you turned on your second computer so that it synced the file. The same can be said about Google Drive and Sugar Sync which works in similar ways.

The same schenario for Dropbox could be applied to the external drive case. If you changed the file on another computer and transferred it to your current computer using an external drive, then you would want it to be displayed as when you changed it, not when you copied it.

So with version 1.2.5 this is now how it behaves. If you already had files indexed using the creation date newer than modification date, then you can reindex them to make Nemo Documents only use the modification time.

If you would rather have the old behaviour, then you can turn it on again in the settings.

We have just released a new version with new features!

For new users, we now have a fun tutorial you can go through to get familiar with the system in a couple of minutes.

But the brand new feature we are really excited about is the email integration add-on. It adds the ability of Nemo Documents to tap into your emails, index any attachments and present them together with all your other files. This makes us excited because the single view of all your files makes it much easier to find a file. You don’t need to worry about if the file was local, was sent to you in an email (and if you have downloaded it or not), or if it’s stored in Google Drive.

Besides putting the email attachment into your normal week view, we also allow you to find a file by searching for its filename. Furthermore we extract who sent the email and display people in the left hand side, in the same way as we display file types of the files in the active view. This makes it easy to narrow down the results and also gives you a good overview, especially in the month view.

The new email integration add-on also marks another big change for Nemo Documents – the add-on is available for a 30 day trial and after that you have to pay for a license to use it.

The income from the sales will allow us to improve on this feature and on Nemo Documents in general. So naturally we hope you will support us. 🙂 The base version of Nemo Documents is still 100% free of charge for both home and business users.

This is all new, we are testing the waters so to speak, but if all goes well, we hope to introduce more add-ons in the future.

If you have any feedback regarding this, please do leave a comment or ask us on getsatisfaction.

Lastly we are discontinuing .NET 3.5 support in this version. .NET 3.5 is really old and fonts look much better in .NET 4, so upgrading was always high recommended anyway.

We pushed out a new version yesterday. We’ve added simplified chinese translation (thanks Eric) and fixed some minor issues related to file changes. Be sure to update to the latest version (just click the header and select check for updates), and let us know if you find any problems or something we can do better 🙂

Ever since the first release of Nemo Documents we have tried to make file finding and file management easier. We have introduced various concepts such as putting files into a calendar view, adding tags and the ability to filter by file types. The time aspect has always been key, and that is why Nemo Documents looks like a calendar.

Like a file manager, until now we have only used the last modification time when showing files. But with the 1.1.0 version released today, we are finally able to show all the times a file has been modified. And the good thing about this, is that it is natural for a file to occur multiple times in a calendar view if it was changed several times.

This means that we are now able to much better keep our promise of: Whatever you remember about a file, you can input it into the system, and you will be able to find the file again. So if you changed a file last week, you can now find it again that way, even if you also changed it this week.

To make it easier to distinguish between the latest modification of a file and older changes, changes are slightly more gray.

Please note that Nemo Documents will only start recording file changes after 1.1.0 has been installed. And it will record and show at most one per time block. Meaning one per month in year view, on per day in month view etc.

File changes is a concept that is very natural to the way we built Nemo Documents, and is one of the more requested features we have. The feature request also show that people come up with all kinds of uses for Nemo Documents we had not envisioned. And that is something we are very excited about!

New release with some minor tweaks and fixes. Hope you enjoy 🙂

We have just released a new version with two new translations: Greek and Italian thanks to Vassilis Oikonomou and Luca Sasdelli. Also font rendering has been tweaked a bit so that Nemo Documents now uses ClearType by default. If this causes any problems or you would rather have it the old way, then you can go to settings and advanced options to disable it. 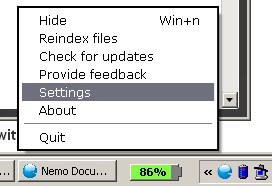 We did some tests on Windows XP and Windows 7 and found the result to look a bit nicer than without ClearType. The change was prompted by the discussion in the following thread. Today is exactly one year since we released the first version of Nemo Documents for Windows. It is also the day that we released 1.0 🙂

It has been a great first year. The product has matured a lot, many new features has been implemented and 12 translations added by the community.

We have had more than 30.000 downloads and many people use it now as an essential tool in their daily life, to keep track of documents and other digital files.

So what does the future fold? Hopefully more of the same, and a whole lot of new stuff. We are currently conducting a survey to help us understand how to make the product even better, so if you would like to help us out with this, please fill it out here.

Thanks to Jessica for the lovely picture.

Posted in Uncategorized | Comments Off on Nemo Documents first birthday

We already get quite a lot of feedback on getsatisfaction and on this blog. But we want to become even better! If you would be so very kind as to fill out this questionnaire, we would be super grateful. Thanks in advance 🙂

A new version of Nemo Documents has quietly been rolling out today. This version is a culmination of things we wanted to get in before 1.0, together with a relatively large number of bug fixes. One of the most prominent new things in this release is that labels now have colors (and yes it is possible to change the color :)). Secondly marked items now look a bit nicer, and we have made it even easier to label files by simply dragging them onto labels. 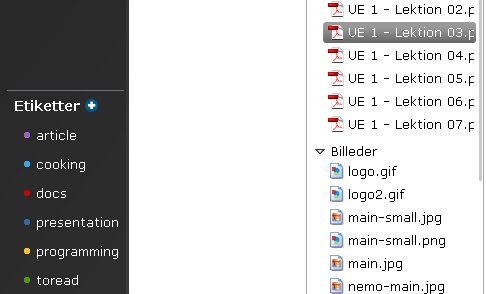 We have also had time to implement some of the most requested items from our feedback system, including the ability to show 7 days in a week instead of collapsing weekends as one day. This can be configured in Settings under the Advanced tab. Another change that made it in is copy as path. A feature introduced in Vista, is now available for all versions of Windows with Nemo Documents. The feature is among other things used to easily attach files to online email programs such as Gmail. You can still drag and drop files to Gmail to attach them, if you prefer that instead 🙂